People come to Ruhengeri for the gorillas.  That’s really all there is to do here but seeing the gorillas was the highlight of my trip.  We arrived the night before and stayed at Red Rocks.  We were up early to have breakfast and make our lunches before heading out at 7am.

We arrived at the meeting point at 8am and were welcomed with tea and coffee and traditional dancers performing while our guides checked us in and they put us into groups. 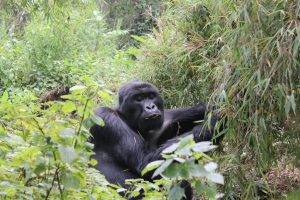 After the performance it was onto the main event!  Our group of seven people were going to see the Titus group – descendants of Titus the orphaned gorilla who was part of Dian Fossey’s original research group (he passed away in 2009).  Our guide’s name was Eugene and he had been a guide for 16 years.  I asked him if he had ever not seen the gorillas when he had gone out and he said no.  We were off to a good start with Eugene.

After the traditional dance and drums we got back into our 4×4 and headed about 20-30 minutes down the road. This is where we would start our hike through the rural fields and farms to the Volcanoes National Park. We were put into one of the easier groups so we had a one and a half hour hike to the entrance of the park.

We then hiked about half an hour into the forest with our tracker.  The trackers go out first thing in the morning to find the gorillas and know where they are.  They radio the guides and tell them where to go.  Once you reach the tracker you must leave all of your stuff except your camera there.  I was the first one in following the guide and next thing you know I was face to face with a gorilla.  I turned to the guide and was pointing going there’s a gorilla right there and he was like yeah, I know.  I was not expecting to be that close by any means.

So we’re snapping away photos and you can see the branches and bamboo moving all around.  As we turn the corner we saw this mother and her baby.  The Titus family is actually a family of 12 gorillas with two silverbacks – Kubaka and Pato.  Kubaka is the dominate male and Pato is second in command.

The baby gorilla was up to no good the whole time and really trying to test his mother.  He picked up a bamboo stick and tried to come at me.  Luckily he had a long stick and couldn’t get at me through all of the foliage in the forest.  He was really fun to watch as he would play and eat and roll around on the ground.

Everyone has one hour with the gorillas.  The gorillas are only visited once a day for 60 minutes.  I wouldn’t say the gorillas are use to having visitors but more that they are completely unfussed by you being there while they rest and eat.

I don’t think you can recommend this experience enough.  The main reason people may not do it is the cost.  It is $750 usd to see the mountain gorillas.  Rwanda has 500 mountain gorillas of the 900 left in the world so just over half.  The experience is extremely organised and you can tell their main priority is to protect the gorillas and ensure the visitors have a chance to see them.  This experience brings much needed funds and jobs to the area.  Even the farmers whose fields we traipsed through on the way to Volcanoes National Park are compensated and the government has a large education program to help locals understand the value of these animals to not only their country but to everyone.