Is it worth visiting the famous Benagil Cave in Portugal?  Absolutely.  The Algarve Caves are a particularly stunning part of the Algarve, Portugal region. 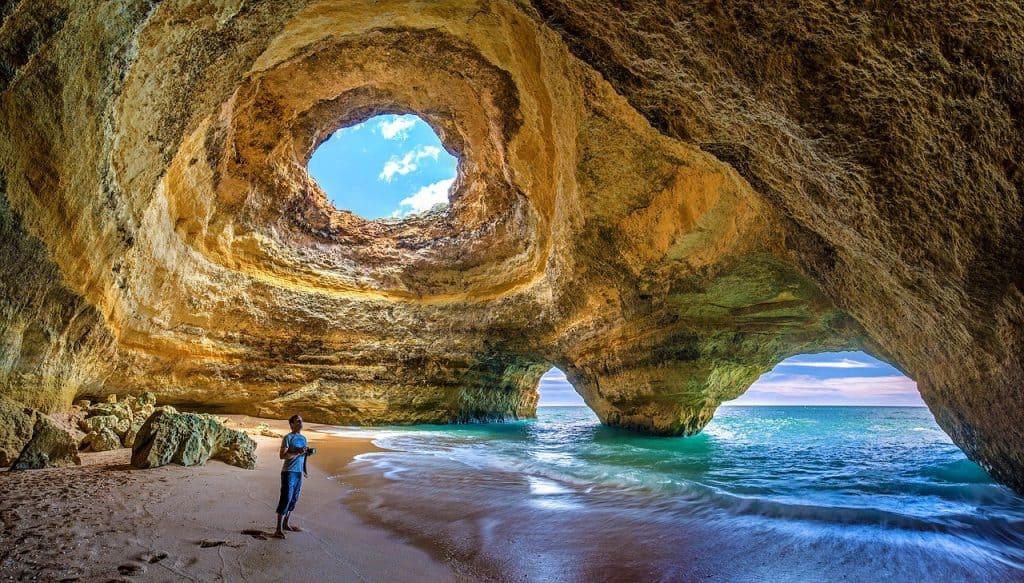 My trip to Benagil Cave, Portugal was my favorite thing I did while I was in the Algarve.

There are a lot of beautiful beaches near Lagos but the Benagil Sea Cave is the highlight of the Algarve.

Many locals call it the Gruta de Benagil, because it looks like a stunning grotto upon the ocean. 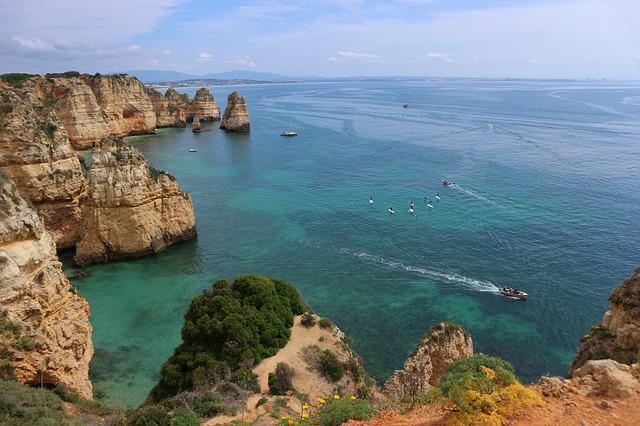 Algar de Benagil, its Portuguese name, is spectacular inside the cave with the sunlight streaming through the roof and the golden sand and beautiful azure waters.  It is a natural wonder of the world and pure travel inspiration for those who have not been.

This part of the world has a lot of rock formations along the coast.

This particularly stunning Portugal Cave (sometimes known a the cave beach Algarve) is located along the coast next to Benagil Beach (Praia de Benagil), in the Algarve Portugal.  The closest cities are is  Portimao, Albufeira, Carvoeiro and Lagoa.

Benagil Cave is about a 40 minute drive east of Lagos or as the map shows a 15 minute drive from Lagoa in South Portugal.

How can you get to the Benagil Cave Algarve Portugal?

There are several ways you can visit the Benagil Cave and Benagil Beach.  I recommend taking one of the Benagil Caves boat tours to get there.  The cave can be visited any time of year. 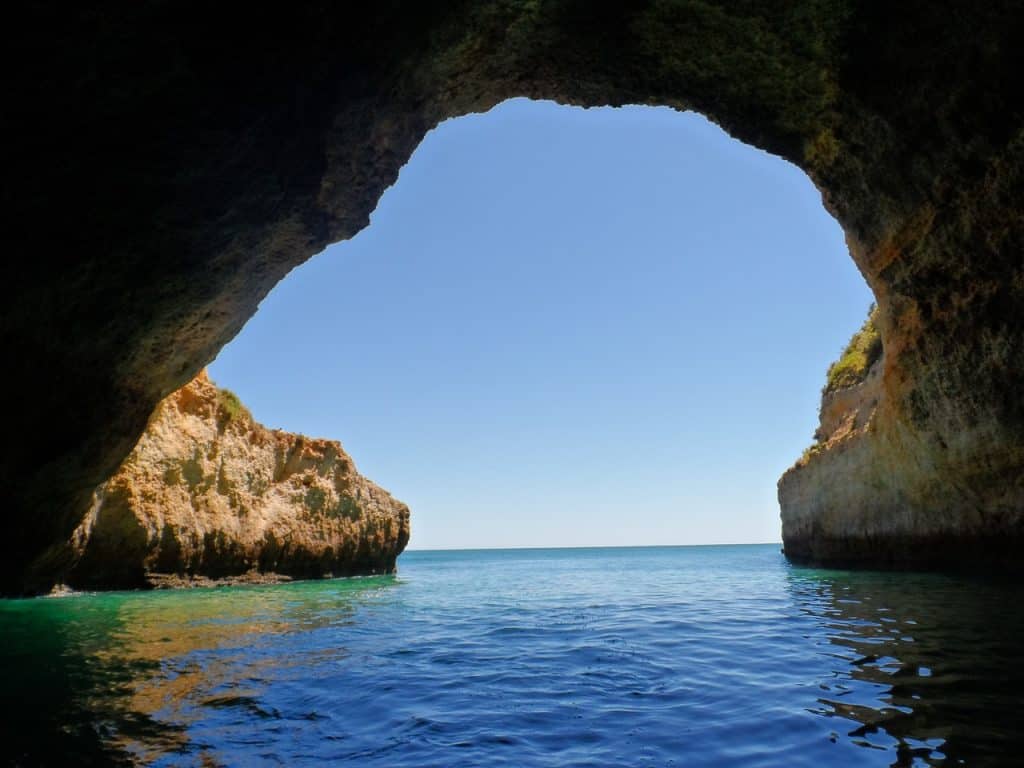 Swim – from Benagil Beach you can swim approximately 200 metres to the Benagil Cave.  You must be a strong swimmer to reach the cave.  The tides and currents change quickly here and I recommend a life jacket or lido to make it there.

I actually do not recommend swimming here but I have seen some people do this.

Drive – you can actually drive to Benagil Cave.  You will only be able to view the cave from above and look down at the beach.  You can walk up to the hole in the ceiling of the cave and see it from above, but there is no way to get to the cave itself on foot.

It is cool to see the cave from above and if you are visiting the beach it is worth a look.   Then you can take one of the Benagil Cave Tours to go into the cave from below. 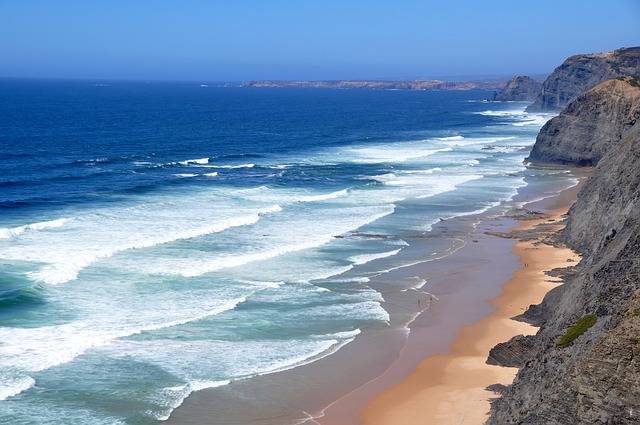 Kayak or Paddleboard – You can rent Kayaks or Paddleboards for about the same price as a sea boat tour if you want.  Its a cool idea but I think for the price it is so much better to take the tour as you will see more of the Algarve coastline.

Take one of the Benagil Cave Boat Tours.  This is the best way to visit the Benagil Caves.  It is the safest and best option as you will visit other caves in the area on the boat trips.

Most people will leave from Benagil Beach or one of the surrounding cities in the Algarve to visit the caves.  It is right next to the beach if you are looking for a direct boat tour to the caves. 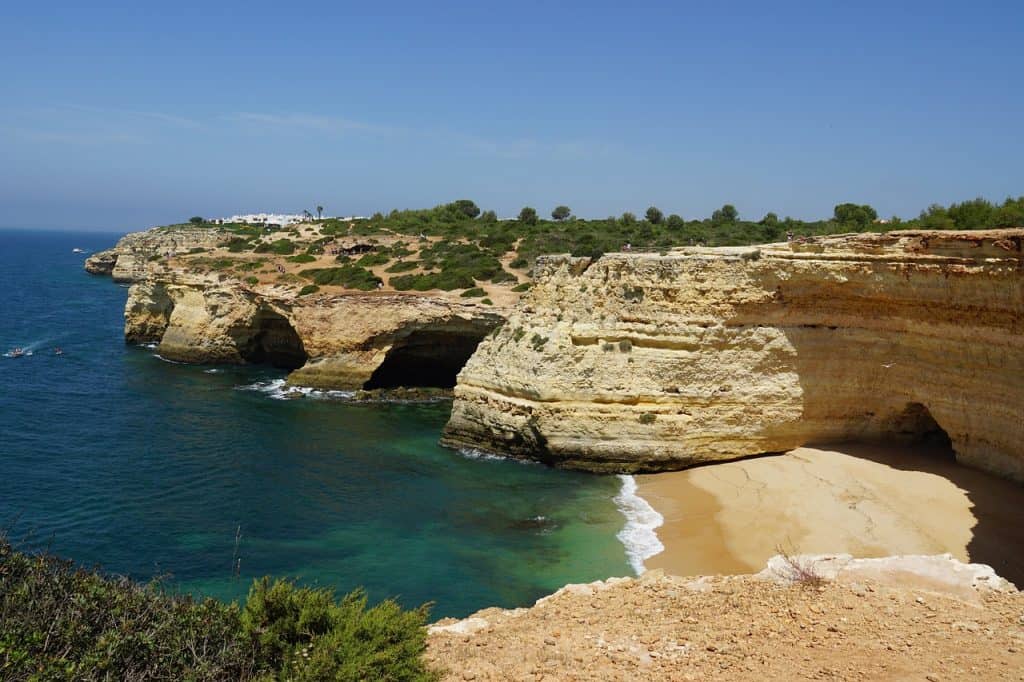 I highly recommend taking one of the Benagil Cave Tours to visit the Benagil Beach Cave.  These tours leave from Benagil Beach, last 2-3 hours and cost anywhere from 30-40 Euro and will take you straight to the Algarve Cave Beach, among many other locations along the coast.

I cannot recommend one company over another as they are all the same.  You can ask at your hotel which one is best for the activities you want to do.  Remember these tours are not just to Benagil Cave, that is the icing on the cake, but they are along the coast where you will see lots of different caves.

There are many different tour companies offering trips to the sea caves.  My suggestion is to go early as it gets quite crowded later in the day.  You will be amazed at how many more boats you will see the closer you get to the cave. 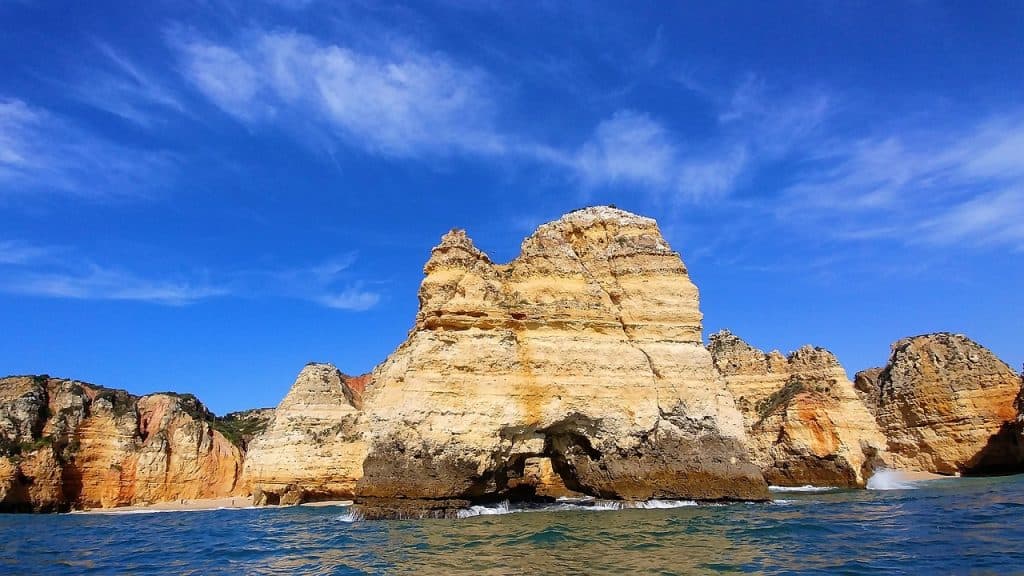 You will want to take one of the smaller boats as this means there will be less people on the boat and they are also faster.  So less time in the boat with fewer people and more time in the cave!

Some of the tours combine the sea caves along with dolphin watching which is well worth it as well.

My experience getting to the Portugal Sea Cave in Algarve

I flew into Lisbon and spent a few days there before taking a bus to Lagoa (not Lagos).  The bus takes three hours and costs around 30€.

You can also take the train but this takes the same amount of time and costs a little bit more.  From Lagoa you can take a 15 minute taxi ride for 10€. 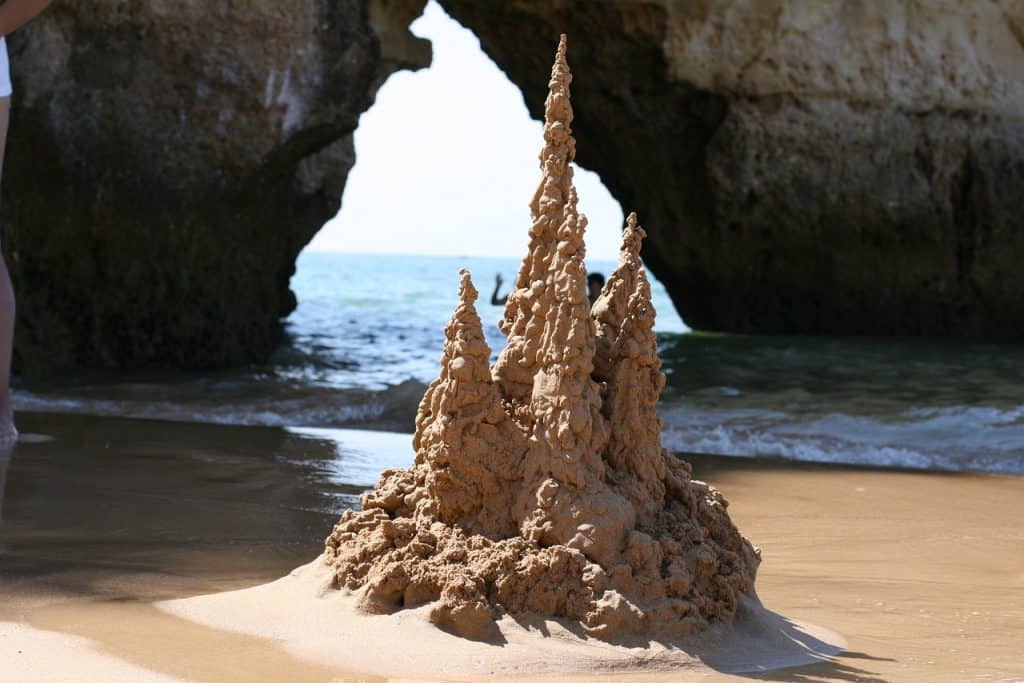 I then took a boat tour from Benagil Beach to the sea caves.  Please note the tours also leave from Lagos, Portimão, Albufeira and Vilamoura.

To visit Benagil cave, you’ll want to plan on about two and a half hours.  I mentioned before that some parts of the boat ride were quite rough but it was never scary or dangerous.

I went first thing in the morning and we were one of the first boats to the sea cave.  Once inside it was absolutely beautiful.  I took a few pictures and it was time to go again.

When we were leaving the cave there were quite a few boats lined up to come inside.  As the entrance is quite narrow and the cave is not huge it gets quite congested waiting for boats to leave so others can get in because it is just not big enough for all the boats. 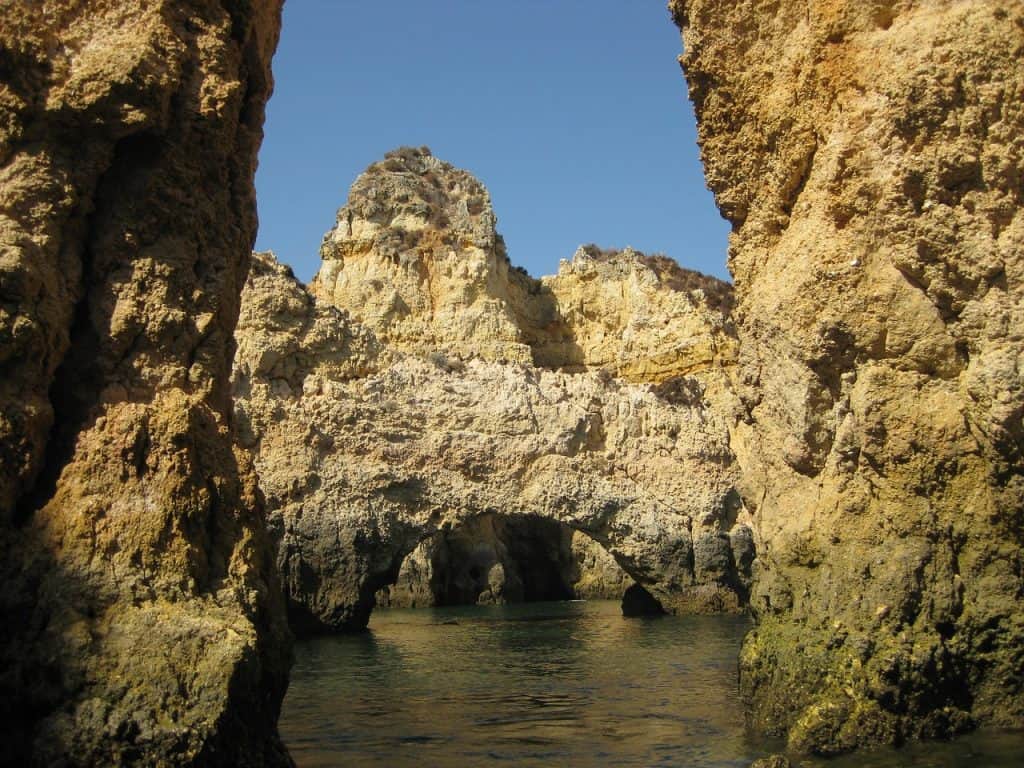 This is also why I think some boats do not allow you to get out of the boat once inside.  It is a timing thing where they want everyone to be able to go inside.

After the cave we spent our time going along the coast checking out the beautiful coastline.

The views inside the cave are absolutely beautiful – even with all the people there.  There is some conflicting information about whether or not you can actually get off the boat when you get inside the cave. 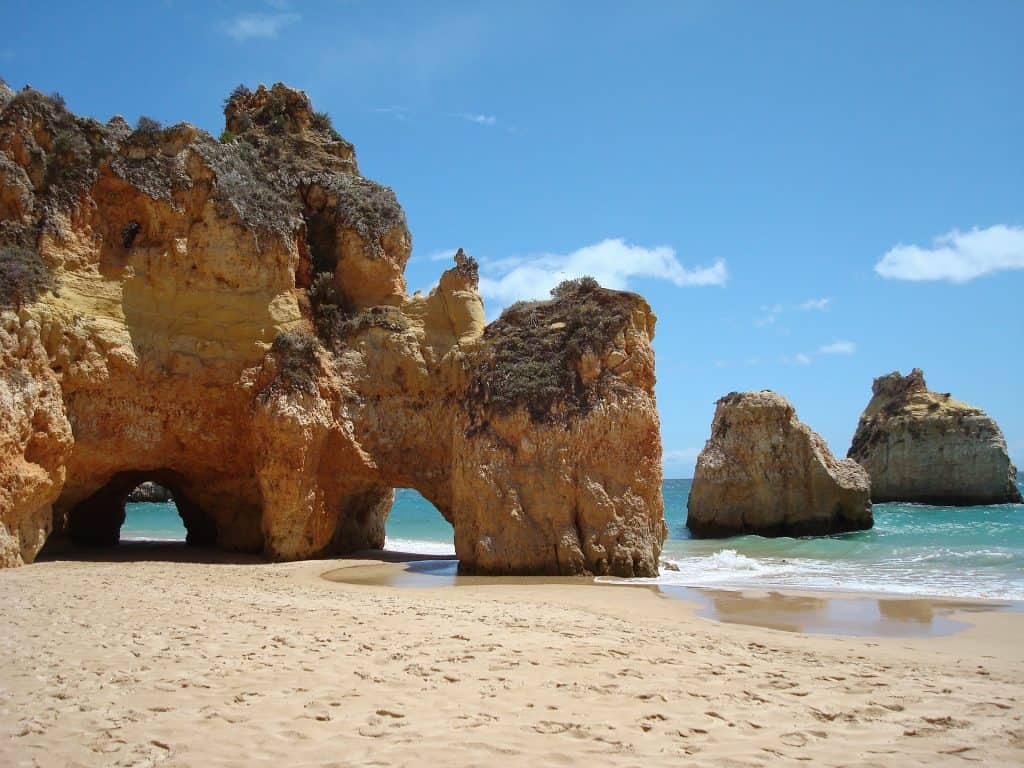 I am wondering if this is being left up to the boat tours?  Are they trying to get in, let you click, click and then want to leave again so that more boats can get in?  As there was quite a line of boats waiting to get in this made me wonder if it is because of the sheer number of people going.

You will definitely have a better chance of stepping foot on the beach in the off season compared to the middle of summer when everyone is on holiday in the Algarve.  Something to think about when you go. 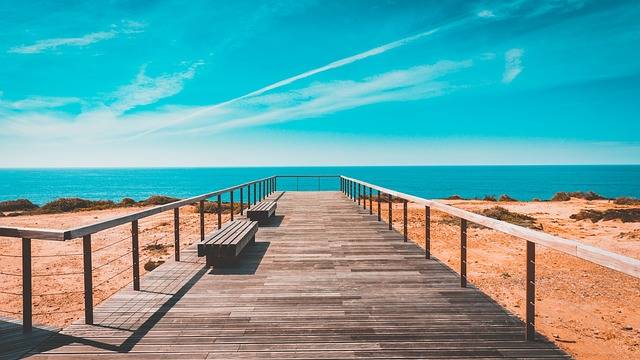 When Is The Best time to visit Benagil caves?

You will want to go early in the morning to the Benagil Sea cave to avoid the crowds.  The boat tours take 2-3 hours and are cheaper in the off season.

The beach is also known as Praia de Benagil in Portuguese and you will find the cave under grutas de Benagil.

You can go out for the morning on the boat tour and then spend the afternoon at Benagil Beach and pack a picnic to make a day of it.  To get to the beach you need to go down a steep walkway to get down to the sand. 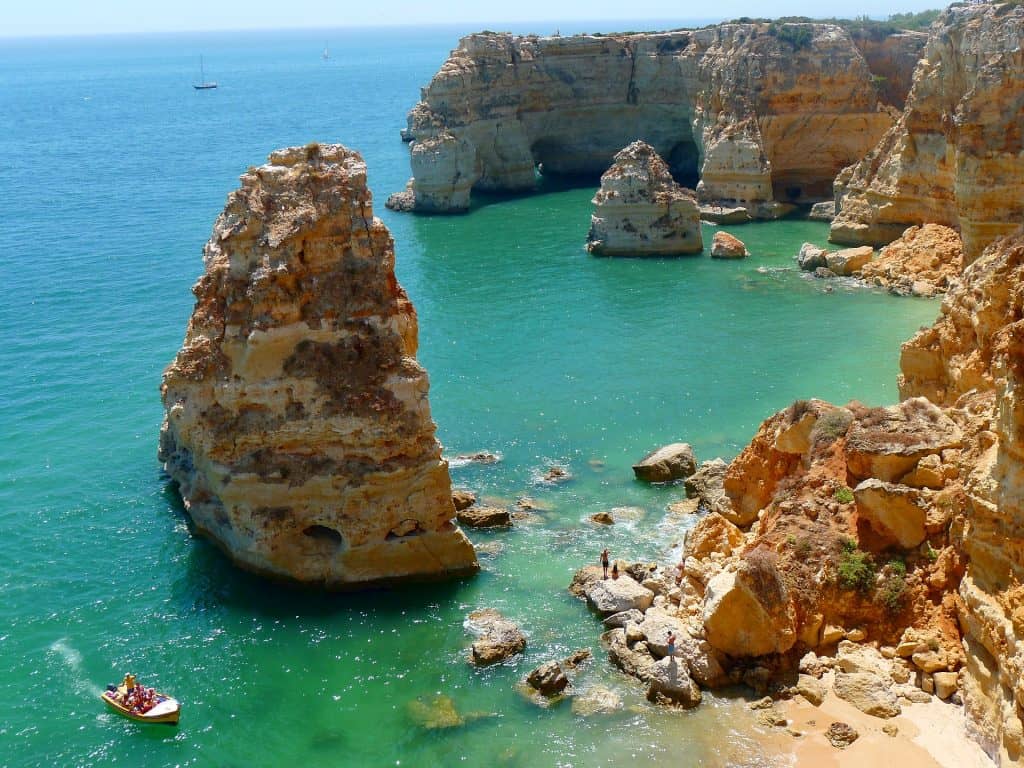 The sea can be quite rough which makes the boat ride quite bumpy.  As it is such a short ride to the caves I would say it is worth it.  Also, it is only rough in certain places and the driver can always take breaks as well.

My driver liked to turn and spin the boat and get us wet.  No problems with that I brought my wet seal for my camera so it was well protected.

You can check out my post to see the mirrorless camera that I use.  I wish I had taken my gopro to use as that is water safe.

Ensure you wear sunscreen and apply it before you even arrive at the beach.  Also pack plenty of water and snacks.  I actually wore my swimsuit under my clothes and brought my towel as well as we were able to swim along the coast.

There are many restaurants located along the coast if you want to stop for lunch or a snack.  Most of the restaurants have beautiful sea views and fresh seafood.

Other Caves To Consider in Portugal

What do you think?  Anything to add to this Ultimate Guide to Benagil Beach?  Sharing is caring.  Feel free to pin this image to save it for later when planning your next trip to the Algarve Portugal. 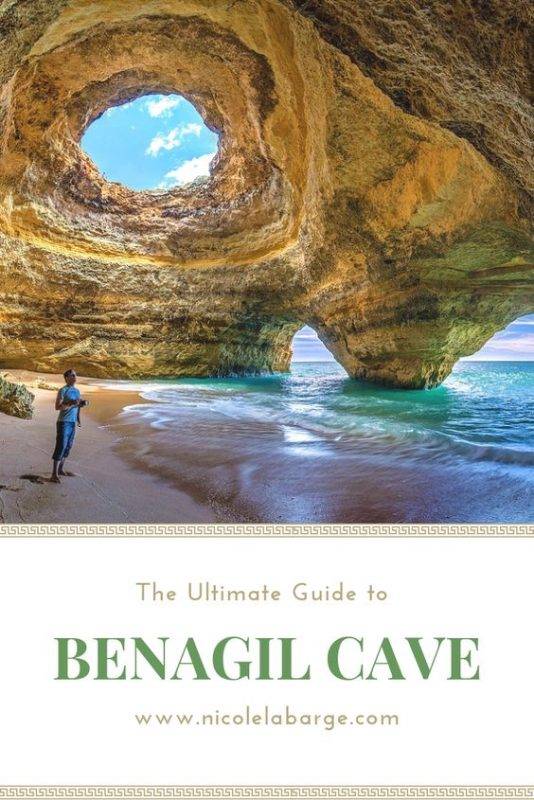