In my twenty years of travel, I’ve had a lot of cool experiences. When I think back I’ve had the chance to sleep under the stars on a deserted island, I’ve survived 50 degree Celcius heat, I’ve lived in four different countries and I went to Iceland 20 years ago before it was all over Instagram but some of my top experiences in my book are the top wildlife encounters I’ve had.

I think back to all the countries I have visited and what I did there I’ve usually planned my trip around seeing a particular animal in the wild there. Monkeys in Thailand, Quetzals in Costa Rica, Gelada Baboons in Ethiopia, Lions in the Serengeti – these animals were the reason I went to these places.

True story – I was actually going to name this website ‘My travel wildlife’ so I could capture all of my wildlife adventures. Then I realised how hard it was to actually capture these moments on film.

Seriously, I look at Planet Earth with David Attenborough and I think I could do that. Now that I’ve been on 10+ safaris I know how difficult that is and I’m going to leave it to the professionals. I want to sit back and relax and enjoy the show.

So here we go. My top wildlife encounters with my photos which really does not do them justice.

Wildlife Encounters around the world

It’s the ultimate adventure but I was scared to death to do it. It turned out to be one of the most
enjoyable and peaceful things I’ve ever done. SHARK CAGE DIVING! 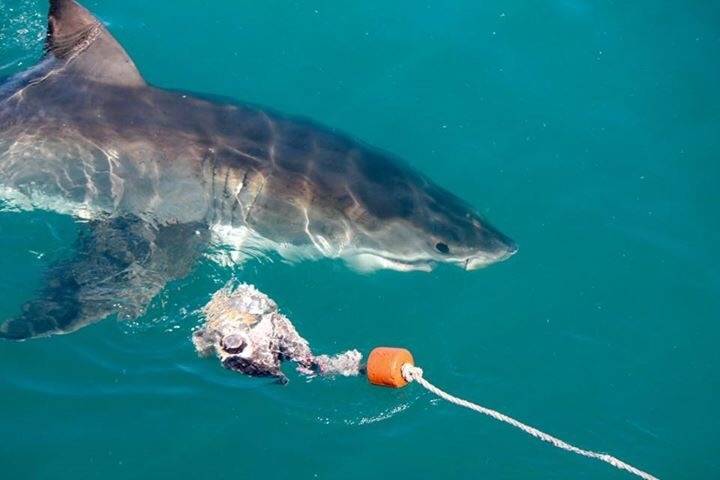 It had been on the list before I even started my Africa trip and as the day got closer I was getting more and more anxious about shark cage diving. I squirmed every time I thought about climbing into a cage off the coast of South Africa and in the water with Great White Sharks.

As I was eating breakfast the morning of I realised I was getting more excited to dive with Great White Sharks. Before I was kind of dreading it, hoping it would get cancelled.

There was still a part of me that was saying ‘I don’t have to get into the water if I don’t want to’ or ‘All the best shots will be taken from the boat’. I was trying to reason with myself before that on why I wouldn’t get in the cage but now I was looking forward to it.

After our briefing – basically no one can put their arms or legs outside the cage….umm yeah, not a problem – we had a 30 minute boat ride out onto the water where we would anchor and start throwing out the chum which is fish guts and blood to attract the sharks.

Now everyone is given a wet suit, boots and a hood and I wish I could say that keeps you warm but I would be lying. It definitely helps but the water is cold – 12 degrees Celsius to be exact. You wait in the cage until your guide tells you to dive down and you just hold your breath and use the bar to pull yourself below the water to see the sharks.

Diving with the sharks is an adrenaline rush but I also found it quite a peaceful experience. I always do when I’m underwater as its silent and the sharks swim right past and you look into their giant black eyes. You forget everything you saw on ‘Shark Week’ and are there in awe of what a spectacular species you are looking at who is also looking back at you.

Swimming with Humpback Whales in Tonga –

I arrived from the main island to Ha’apai which is a direct flight and takes about an hour.  I was here to go swimming with humpback whales! 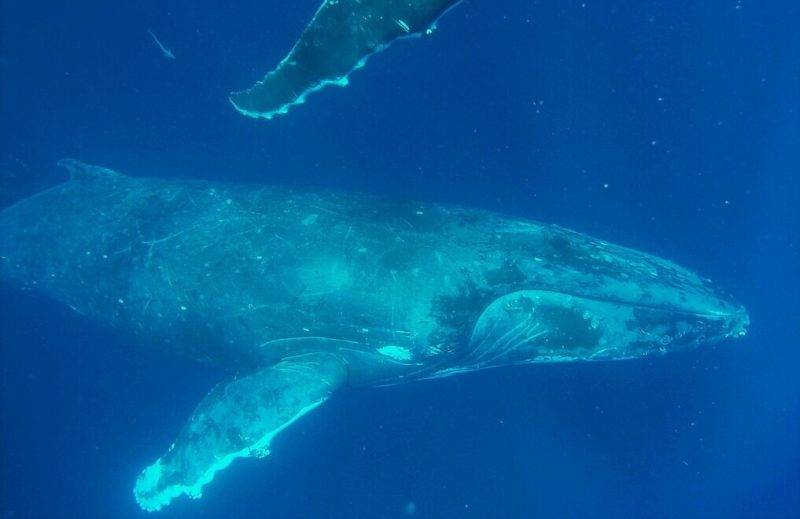 Jodi from Ha’apai Beach Resort met me at the ‘airport’ (it’s a small landing strip on the island) and took me straight to the boat where I hopped on for my first day of swimming with humpback whales. We headed out in our snorkelling gear – wetsuit, snorkel, fins. I thought we would have problems finding the whales but honestly that first day there were so many whales it was more of a question of which ones we were going to follow and which ones did we think were going to hang out for a while because believe me they swim fast and there is no way you are going to catch them.

The best experience of the day was watching four males showing off to prove who was the dominant one. They were breaching, and blowing bubbles and all around showing off for us. It was amazing to then get in the water with them and watch this.

I still remember this gigantic male swimming below our boat and he was belly up so you saw the bright white of his under belly in the deep blue of the ocean. And he was fast. So fast. And then two flicks of the tale and he breached again. It was an amazing experience. 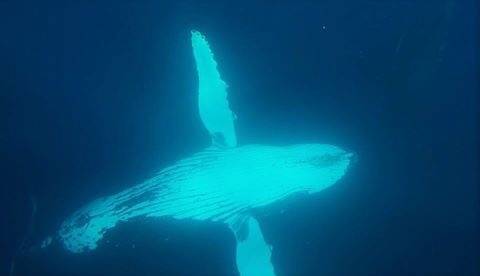 We hiked about half an hour into the forest with our tracker.  The trackers go out first thing in the morning to find the gorillas and know where they are. 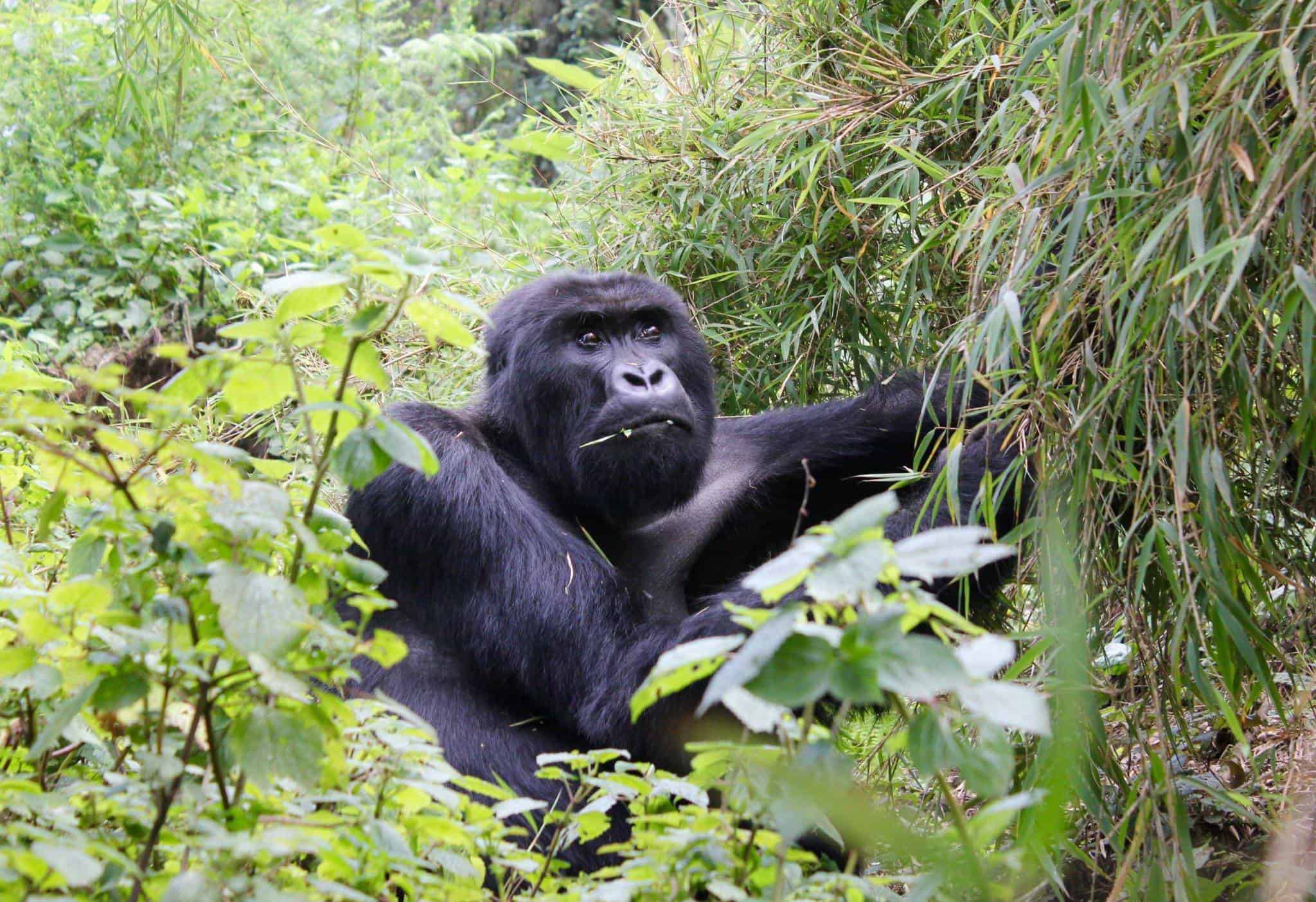 They radio the guides and tell them where to go.  Once you reach the tracker you must leave all of your stuff except your camera there.  I was the first one in following the guide and next thing you know I was face to face with a gorilla.  I turned to the guide and was pointing going there’s a gorilla right there and he was like yeah, I know.  I was not expecting to be that close by any means.

Spending the day with a cheetah named Susan –

This was a very special experience for us as we were the only two there and we each had our own cheetah.  Mine’s name was Susan and Claire’s one was named Lillian and they were both gorgeous.  When we first met them they were lying down just chillin’.

The cheetahs are different than the lions as they will let you touch them anywhere except the following three places – inside the mouth (like I was going to try?!?), their front paws, and inside their ears.  They were completely fine with us petting the top of their heads and touching their tail.  I had Susan purring within minutes.

We actually spent a long time interacting with the cheetahs before we took them for a short walk.  The guide said to us that the schedule is completely up to the cheetahs and their behaviour when we are with them.  If they don’t like the interaction we would move onto the walking first.  Luckily our cheetahs were very relaxed and actually didn’t want to go for a walk at all.  So we went for a very short walk with lots of rest stops.  Susan was not impressed with the walking and it always took us a few times to get her going again.

If you go to the Maldives and do not get to experience the underwater playground there you are missing out on best feature of the Maldives.  While I was there I was able to snorkel the beautiful reefs with Manta Rays, turtles, tropical fish and of course the beautiful whale shark. 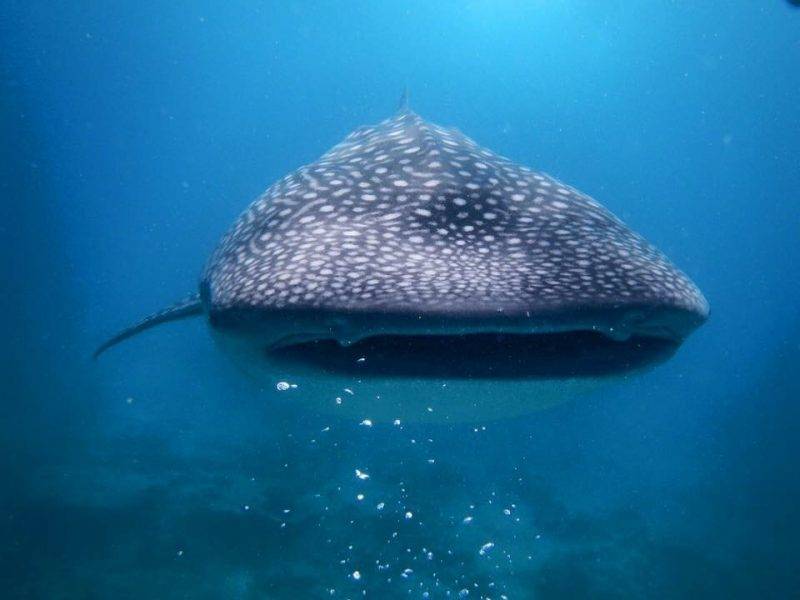 Whale sharks are attracted to the rich plankton filled waters of the Maldives.  They do not feed the whale sharks here to attract them which means that you are not guaranteed to see them but it is a lot less touristy as well.  I was lucky enough to swim with four different whale sharks while I was there.

And what struck me most about them is how elegant and graceful they are along with being fast swimmers.  They make it difficult to keep up with them!  It was a long day swimming but definitely worth it to see them in their natural habitat.  One of my fave wildlife encounters.